On May 19, the President of Ukraine Volodymyr Zelenskyi met online with students of higher education institutions. The event was also attended by the Minister of Education and Science of Ukraine Serhii Shkarlet. 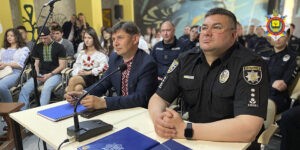 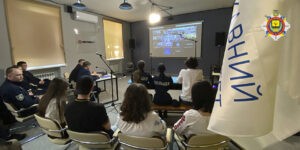 Representatives of 25 higher education institutions from all over Ukraine had the opportunity to talk to the President. Donetsk State University of Internal Affairs is the only one among the departmental educational institutions, whose cadets took part in the event.

The President of Ukraine Volodymyr Zelensky addressed the Ukrainian youth, for whom the future of our strong, independent state lies. The guarantor demonstrated openness to dialogue, voiced questions to which he wanted to hear the answers of Ukrainian students. He stressed that today we have to choose what kind of Ukraine we see in the future and in which country we want to live.

Students and cadets spoke about their vision of the issues that concern the President, in addition, they asked questions to Volodymyr Zelensky, to which he gave answers – sincerely, honestly, frankly!

Rector of Donents State University of Internal Affairs in his address to the President of Ukraine, Minister of Education and Science, all participants assured that due to analyzing the international experience of European countries, the University staff is aware of the problems of economic, social and humanitarian nature of our country in the postwar period. That is why we have to train hundreds, even thousands of law enforcement officers with legal awareness who will be able to take over the post-war reconstruction of Ukraine!

The management, staff, cadets and students of Donents State University of Internal Affairs are grateful to the President of Ukraine for the opportunity to take part in the online meeting!

Today, during the selfless struggle of the Ukrainian people against the enemy, when our defenders defend the sovereignty and independence of the state, the President of Ukraine supports the fighting spirit of our military, the faith of Ukrainians in victory, demonstrates sincere patriotism, courage, honor and dignity.

Cadets of DonSUIA took part in an online webinar from EUAM in Ukraine
27 Вересня, 2022